A RAY OF HOPE IN AMERICA’S CITY OF ANGELS

A RAY OF HOPE IN AMERICA’S CITY OF ANGELS 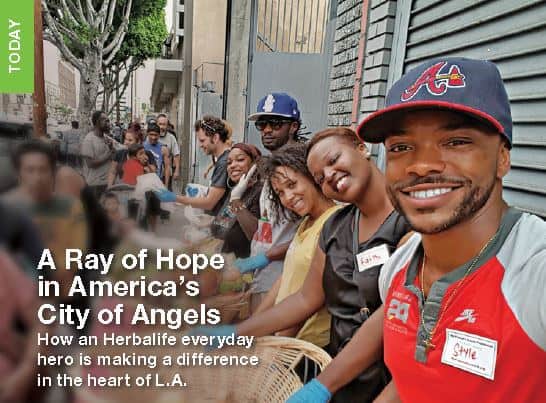 How an Herbalife everyday hero is making a difference in the heart of L.A.

“No matter how much you give to others, you will always be given ten times the blessing you give out!”

Skid Row is the undisputed Homeless Capital of the United States. Just a few short blocks from the gleaming office towers of downtown Los Angeles, this pocket of destitution, tent cities and broken dreams constitutes the nation’s biggest concentration of homeless people living and sleeping on public sidewalks, in scattered camps under tarps.

It’s a disheartening environment in every sense of the word, but rain or shine a group of Independent Herbalife Members brings donations, comfort and words of encouragement
to Skid Row’s residents every week. Style B., Executive President’s Team 20K, explains how these big-hearted Members are giving back to the community.

SOWING THE SEED OF COMMUNITY SERVICE

While Style’s childhood neighborhood was not as unnerving as the day-to-day existence on Skid Row, he witnessed firsthand the hardships of many families, and how some local programs helped
them overcome their difficulties as well as bring some joy to the community. “I remember a local truck would come once a week to distribute milk, bread and other foods to the families in my
area. I was one of the kids that would run up to the trucks, because they represented a chance to eat,” he recalls.

“At the time, I didn’t know that this was an act of kindness. I thought it was normal for families to receive free goods,” Style adds.

Places like the Boys & Girls Club and the YMCA also played a key role during his childhood. They not only provided a safe place for him to learn and grow in a caring environment, but also planted the seed of community service in young Style’s mind.

“The most valuable thing you can give to someone is your time and a smile.” – Style B. 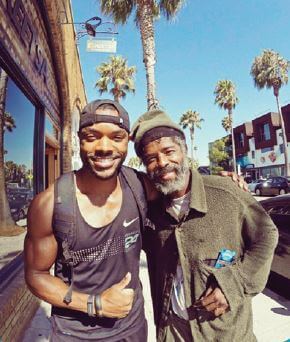 The gift that keeps on giving Fast forward to Los Angeles today. Style is now a successful Independent Herbalife Member, leading an ever-growing organization – the Get Uncomfortable
Squad – since 2011. Just like most compassionate people in their adult years, he would find himself giving away food on the holidays or periodically volunteering to help those in need. But even though the seed sowed in the rough streets of Oakland was budding, it hadn’t fully blossomed yet.
That blossoming happened when midsummer a good friend of Style asked him if he was available to come help feed and clothe the homeless on Skid Row.

“My initial thought and expectation was that I was going there to give. But I later realized that I received a lot more than I was giving. I felt a bevy of emotions that helped reconnect me to life and other people. It was a very humbling experience, and now I can’t see living life truly to the fullest without giving back to others,” he happily concludes.

A simple smile can make a big difference Since that first day of volunteering on Skid Row, Style and some of his team members have returned every single Wednesday to support the “We Feed the
Hungry” group. With them, they bring clothes, food, canned goods, toiletries, and even Herbalife Protein Bars, but the most prized gift they deliver each week is something that money can’t buy:

“Since joining Herbalife, I realized how much BUSINESS Feature Story a community can be affected by one person’s time and a smile,” he says.

“I show up every week on Skid Row with my Herbalife shirt on, a huge smile, and nothing but love in my heart.”

Volunteering in a neighborhood where the population is stuck in a cycle where they drift between the street and hospitals, jails, treatment centers or shelters — and then back to the street can be a true emotional roller coaster. “One of the most rewarding days was being revisited by my past,” Style recalls. “One of the children I grew up with while in foster care was in a donation line. Seeing him brought out a lot of emotion, and I had to step away and collect myself before I could
go over and talk to him. I was grateful to be there to give him a hug and words of encouragement.”

“What keeps me going is an appreciation for the lives of the people on Skid Row and the reminder to stay grateful through life’s tough lessons. – Style ”

Turning a team into a force for good His volunteering work has also helped Style build meaningful bonds with the team members who joined this cause. “I didn’t ask my team to give up their time
to join me. They all started asking me from their own hearts, “ he says. “Now as a team, we are confident that there will be a day when people will see Herbalife as much more than just shakes and fitness. They will see that what we do – as an organization and as individuals – really does impact our planet in a positive way,” he adds.

Style strongly believes that being an Independent Herbalife Member has inspired him to be more involved in the community, but he has words of advice to other Members who feel inspired to follow in his footsteps. “Work really hard to build your Herbalife business, and generate enough income to be able to take time out of your life to give to others,” and he emphatically concludes, “A gift of time is more valuable than a gift of money, but you can’t be of service to others unless
you’re in a position to do that without compromising your commitments to your own family first.”