In a companion piecei I summarize common questions and answers about the nature of legitimate multi-level marketing (MLM) businesses, illegal pyramid schemes, and the differences between the two.ii

The framework from that piece is applied here to assess a specific MLM company’s business model – Herbalife – and to conclude that Herbalife meets the criteria for a legitimate MLM, while it fails to meet any of the criteria for an illegal pyramid scheme. The framework includes the fundamental criterion differentiating a legitimate MLM business from a pyramid scheme: compensation not for mere recruitment, but tied to actual product sales. Beyond this, the framework highlights four other business practices that are not “litmus test” criteria for legitimacy, but nevertheless are consistent with the operation of a legitimate MLM while they make little or no sense for a pyramid scheme operator to follow. Lastly, I discuss an issue commonly – but erroneously – seen as a test for pyramid status, the percentage of end-user sales to non-distributor versus distributor ultimate consumers. 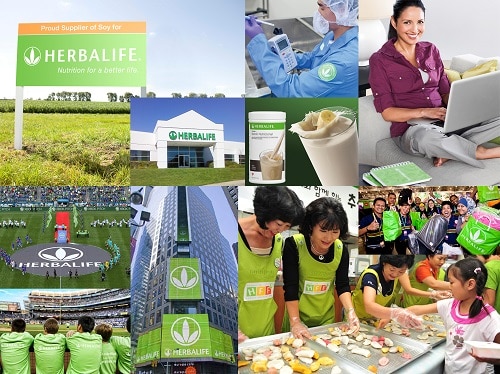 Compensation Based on Retail Sales, Not on Mere Recruitment

Herbalife’s distributor compensation plan offers compensation that is directly linked to the generation of product sales. It does not award any compensation for mere recruitment.iii

An Herbalife distributor can earn income through:

Registration as an Herbalife distributor requires only the purchase of the Herbalife Mini
International Business Pack (IBP), a kit that includes the distributorship application and other documents to help the distributor launch his/her business. A few product samples are also included in the Mini IBP. If the registering distributor prefers, s/he can buy the full IBP, which includes all the same documentation, plus a starter supply of some of the company’s full sized products (e.g. a canister of Formula 1 Shake; a jar of Herbal Tea Concentrate; and energy bars). The Mini IBP costs $57.75 and the full IBP costs $95.55 in the U.S.

As comparison, the U.S. Direct Selling Association reports that “the median cost for the start-up kit is $99 and usually includes items such as samples, catalogs, order forms and other tools that help the seller begin selling.”iv Thus, Herbalife’s registration fee is reasonable in comparison to those of other direct selling companies.

In contrast, an illegal pyramid would not benefit from low enrollment fees, because they are the primary means of compensating incumbent participants in the illegal pyramid scheme.

Scientific and product investment to create and manufacture sellable products

Herbalife makes significant expenditures across multiple scientific areas that support highquality and innovative product development. It maintains its own design and testing laboratory and manufacturing facilities for its products. It has 180 scientists on staff, 19 of whom have Ph.D.s. Thirty consulting scientists supplement this internal staff, all with Ph.D.s. In 2011, Herbalife spent about $25 million combined on research and development, technical operations, scientific affairs, quality assurance and quality control, product safety, and compliance efforts. Beyond this, an additional $11 million was spent on nutrition affairs, product licensing, and strategic sourcing. Herbalife continues to support outside scientific research, with 12 clinical studies initiated between January 2011 and March 2012, five on the Formula 1 product.

As a result, Herbalife sells well over 100 different products, often positioned as part of an overall program that targets particular segments of consumers (e.g. weight-loss; products focused on women versus on men; etc.). This enhances sellability in two ways: first, it improves distributors’ ability to match products to the particular buyer’s desired benefits; and second, it naturally promotes cross-selling of multiple products together.

In addition to the product portfolio itself, Herbalife’s retail pricing is attractive when compared with competitors’ products; in a May 2012 comparison with other protein shake products, Herbalife’s Formula 1 product was priced at $1.29 per serving, ranked 8th in price per serving out of 11 products compared (i.e., only three were priced lower). This price point is even more attractive when one considers that the consumer gets the product plus the personal-selling services of education and convenience when buying Herbalife products, while purchasing the competitive products from a bricks-and-mortar store is a “do-it-yourself,” lower-service purchasing experience. Herbalife Nutrition Club (NC) members who were surveyed reported their primary reason for attending; the top two reasons were “Healthy Meal Replacement” (listed by 54 percent) and “Advice and Coaching by the NC Operator” (listed by 28 percent). These two reasons reinforce the dual importance of quality/sellability of product, and customer service that is the hallmark of direct selling.

These efforts do result in sellable products, one obvious measure of which is Herbalife’s actual sales results through time. The company’s 32-year history suggests its ability to design, produce, and sell products that end-users want to buy; it would be hard to imagine a company continuing in existence for this long if its products did not offer value to end-users!

And indeed, Herbalife has enjoyed robust sales growth. Herbalife’s net sales (the actual revenue to Herbalife after distributor allowances) grew from 2007 to 2011 from over $2.145 billion to over $3.454 billion, a 61 percent increase. The company paid out over $1 billion in royalty overrides to distributors in 2011 (which does not include wholesale or retail profits also earned by distributors).

In contrast, an illegal pyramid would have little incentive to make these scientific investments in product design and quality in order to enhance the sellability of its product line, because these investments are wasted in a scheme centered on “headhunting fees” rather than on successful product selling.

Willingness to take back unsold product when a distributor resigns

Herbalife offers a buy-back policy if a distributor decides to resign the Herbalife business, but is left with unsold inventory, appropriately adjusting commissions or royalty payments paid to the upline distributor for the now-returned product. Herbalife also requires a sponsoring distributor to allow a new distributor applicant to decline the business opportunity at any time within 90 days of becoming an Herbalife distributor. These two policies allow the Herbalife distributor to consider both the initial decision to sign up, and a later decision to leave the business, without the burden of unsellable inventory to bias those decisions. Herbalife also offers a money-back guarantee, but product return and buy-back expenses were only 0.4% of retail sales in 2011,v suggesting this is a minimal problem for the company.

In contrast, an illegal pyramid suffers if it offers a reasonable buy-back policy, because any products it does offer for sale have little value or marketability, and thus the pyramid scheme operators would likely face very high return rates.

Herbalife discourages both new and ongoing distributors from loading up on inventory that the distributor cannot sell, or does not want to consume, in the near term. A sponsor of a new distributor is expressly forbidden from requiring the new distributor to maintain a minimum stock level of products or materials. Ongoing distributors are similarly not permitted to stock up on products primarily in order to advance their position in the Marketing Plan and face sanctions if they do so. Instead, the company tells distributors that “Products purchased from the Company are intended to be sold and distributed to retail customers and downline Distributors, or used for Distributors’ and their immediate families’ own personal consumption.”

An illegal pyramid has no incentive to promulgate a no-inventory-loading policy, because any product it might sell would have little or no real market value, so discouraging inventory loading would result in no product being bought at all and thus no fueling of the pyramid scheme that gives commissions on mandatory purchases by new recruits.

Please see my companion document, “FA{Q&A} on MLMs and Pyramid Schemes,” for a discussion of non-distributor consumption. The lack of any (or any significant) non-distributor consumption might be informative in trying to assess whether a firm is operating a pyramid scheme, but only if it is also established that the product for sale has little or no value and that sales are driven only by a money-making program based on recruitment.vi Herbalife’s compensation plan, based on retail sales, along with its no-inventory-loading policies, mean that it does not reward distributors for mere recruitment.

Herbalife, like other MLM firms, does not have an end-user product- and quantity-specific database that would permit precise measurement of the proportion of sales made to nondistributor end-users. Beyond other traditional direct sales methods for in-home consumption, it estimates that 34-41 percent of sales are driven by daily consumption methods, mainly consumption at Nutrition Clubs but also consumption through other methods such as Weight Loss Challenges. The development and spread of Nutrition Clubs is a notable indicator of the attractiveness of Herbalife products at retail.

These are locations (either a distributor’s home or a commercial location) where an Herbalife distributor provides single-serve product(s) (e.g. the Formula 1 Shake, often offered together with herbal aloe concentrate and herbal tea concentrate) to his/her retail customers. The customer can pay a single day’s membership fee and have the product prepared for him/her. The results of a survey in 2010 indicate that 55 percent of Herbalife retail customers who have visited a NC in the U.S. do so every day, and that 55 percent of those who have visited end up attending for longer than six months.

Thus, not only does Herbalife’s compensation plan fail to reward mere recruitment, but its products are in fact sold broadly to non-distributor end-users as well as to distributors for personal consumption.

Herbalife’s compensation plan and business strategy are consistent with the practices of a legitimate MLM, from its practice of paying distributors only based on actual sales to its investments in product and marketing strategies to promote sales and growth. Herbalife’s practices are inconsistent with the operation of an illegal pyramid, and an illegal pyramid scheme operator would have little or no incentive to follow these practices. My conclusion is therefore that Herbalife indeed does operate a legitimate MLM business. 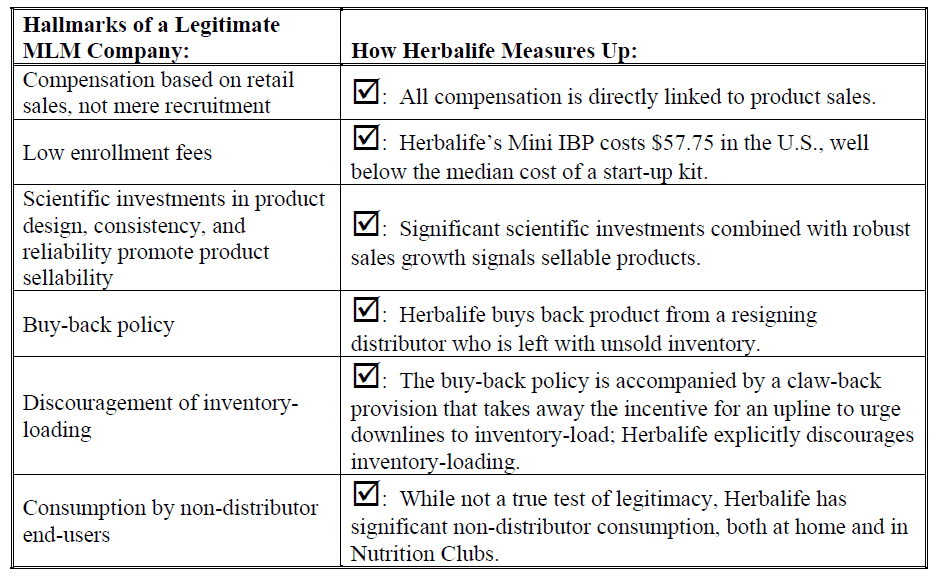 iii For example, The Webster v. Omnitrition case (Webster v. Omnitrition Intern., Inc. C.A.9 (Cal.), 1996) says that the “Sine qua non of [a] ‘pyramid’ scheme is [the] right to receive, in return for recruiting other participants into [the] product sales program, rewards unrelated to [the] sale of product to ultimate users.” FTC v. BurnLounge (U.S. District Court, Central District of California, No. CV 07-3654-GW(FMOx), Statement of Decision, notes that “Inventory-loading pyramids are illegal not simply because there are wholesale purchasing requirements. They are illegal because the purchases are incentivized by commissions that result from recruiting others to join the scheme through similar purchases.” Stull v. YTB International (U.S. District Court, Southern District of Illinois, Civil No. 10-600-GPM, September 26, 2011), states that “A lawful MLM program is distinguishable from an illegal pyramid scheme in the sense that the ‘primary purpose’ of the enterprise and its associated individuals is to sell or market an end-product with endconsumers, and not to reward associated individuals for the recruitment of more marketers or ‘associates.’” The Amway case (FTC Final Order, In the Matter of Amway Corporation, May 8, 1979) states: “’Pyramid’ sales plans involve compensation for recruiting regardless of consumer sales. In such schemes, participants receive rewards for recruiting in the form of ‘headhunting fees’ or commission on mandatory inventory purchases by the recruits known as ‘inventory loading.’”

vi See for example FTC v. BurnLounge: “A structure that allows commission on downline purchases by other distributors does not, by itself, render a multi-level marketing scheme an illegal pyramid.” Also pertinent is an FTC letter of January 24, 2004 from James A. Kohm to Neil Offen, stating: “In fact, the amount of internal consumption in any multi-level compensation business does not determine whether or not the FTC will consider the plan a pyramid scheme. The critical question for the FTC is whether the revenues that primarily support the commissions paid to all participants are generated from purchases of goods and services that are not simply incidental to the purchase of the right to participate in a money-making venture. A multi-level compensation system funded primarily by such non-incidental revenues does not depend on continual recruitment of new participants, and therefore, does not guarantee financial failure for the majority of participants. In contrast, a multi-level compensation system funded primarily by payments made for the right to participate in the venture is an illegal pyramid scheme.”